Explaining the probable impact of the new Apple iPhone, one UPS employee recalled the impact of the last new iPad launch.  At its internal hubs, UPS created more work hours for part timers and enjoyed more revenue because of the volume spike that lasted for weeks. “Those small just above letter-sized boxes that iPods, iPads and iPhones come in are great for us.”

A JPMorgan Chase analyst even suggested that iPhone 5 sales could meaningfully elevate an otherwise sluggish 4th quarter GDP if they repeat the October 2011 surge in online and retail computer sales when a new iPhone was sold. Correspondingly, WSJ.com reports that Verizon and AT&T are planning for the pop in data plan upgrades that follow new iPhone launches.

New iPhones and data plans affect the consumption expenditures component of GDP and then propel it even higher through the multiplier. Defined as a ripple of spending that follows from one initial purchase, with the multiplier effect, the new iPhone is only the beginning.

But is it? Some disagree saying the iPhone will only divert spending from other purchases and competitors. Others, like economist Paul Krugman, cite the fallacy of the broken window. Proposed by 19th century economist Frederic Bastiat, the broken window fallacy tells why a broken window is not an economic blessing. As we explained in a past econlife post, Bastiat “agrees that a glazier would receive, for example, 6 francs to fix it. However…Bastiat then points out that the money given to the glazier would otherwise have been spent on new shoes or a book. And, having been able to spend the 6 francs on a new pair of shoes, their owner would have had new shoes and the old, unbroken window.”

And finally, if Apple stock continues its upward climb, some of us might feel more affluent, shift our downward sloping demand curves to the right, and enjoy the wealth effect.

Sources and Resources: For more on how JPMorgan Chase calculated Apple’s iPhone impact, their note is here while you can see firsthand how people disagreed in Dr. Krugman’s blog ( which included the UPS worker) and a NY Times Economix post. Because it not only might relate to iPhones but also to disaster spending, this paper about the broken window fallacy has broader significance.

Finally, here is a graph from a WSJ.com article that shows the data upgrade spike when a new iPhone launches. 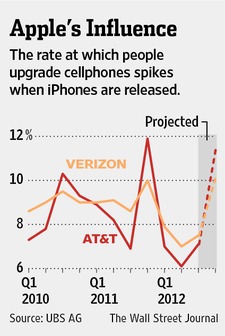 A Weather Dilemma for NYC

QE3 and the Baby Boomers