Let’s look first at unemployment and then at the candidates.

Our unemployment story starts with the census of 1880.  For the first time, the federal government tried to gauge unemployment by asking all people age 10 or older who named a “profession, occupation or trade” how long they had been unemployed between June 1, 1879 and May 31, 1880. People without a job were defined as unemployed.

60 years later, the definition changed. Since 1940, to be counted as unemployed you’ve had to be able to work and actively looking for a job. That means that during July, approximately 12.8 million people–8.3% of the labor force—were actively looking for a job. People who were discouraged and stopped looking? Not included. People who worked less than they wanted? Not included.

There is a debate among economists about the current causes of unemployment. If you believe that the problem is primarily structural, then your solution relates to job skills. On the other hand, those that cite the business cycle say more stimulus is the answer.

Where does all of this leave us? Once again, we can ask whether more government or less government will diminish unemployment.

President Obama says that his American Recovery and Reinvestment Act of 2009 funded 154,600 jobs, the economy added 4.4 million jobs, and without the act, the recovery would have been even more sluggish. Disagreeing, Mitt Romney says that the President’s spending, tax and regulatory policies have created an uncertain business climate that exacerbated the slowdown. Both seem to be targeting structural and cyclical problems.

This academic paper explains the changing definition of unemployment. You can access a wealth of statistics and charts at the Bureau of Labor Statistics (BLS) cite. For the graphs below, my BLS sources were here and here. And finally, to look further at the structural/cyclical debate, you can go here. 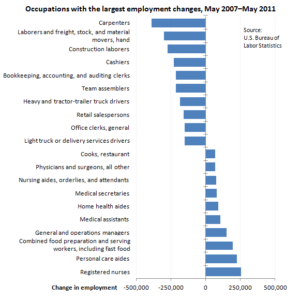 What Can You Learn From the Phone Book?